Our landscapes, the ones we drive by, the ones beneath our feet, the ones all around us, tell stories of the elements: earth, air, fire, water. That is the photo challenge for this week at WordPress – Elementals, and it became a Sunday [and Monday] drive, a once frequent activity for my husband and me over the years. Usually, we’d just hop in the jeep and let it take us where it would go, stopping, pausing, and going further until we either found a place to stay or turned around and circled back. But this day we had a mission: photograph the stories whispering in the landscape around us, a landscape truly shaped by earth, air, fire, and water.

Our travels took us through volcanic lava flows and glacial flood zones, northwest to Chelan, north again to Pateros and Brewster, past the Chief Joseph Dam, back to Grand Coulee Dam. On Monday, I headed through the Grand Coulee itself to Dry Falls and back home again, making sure I captured both sides of the Coulee Monocline. There’s much more to capture, on another day.

For those who want a few bits of ancient elementals, see the Interactive Washington’s Ice Age Floods or click links on the featured image Thinglink below; the rest of you may want to follow the photo journey in rest of this post. 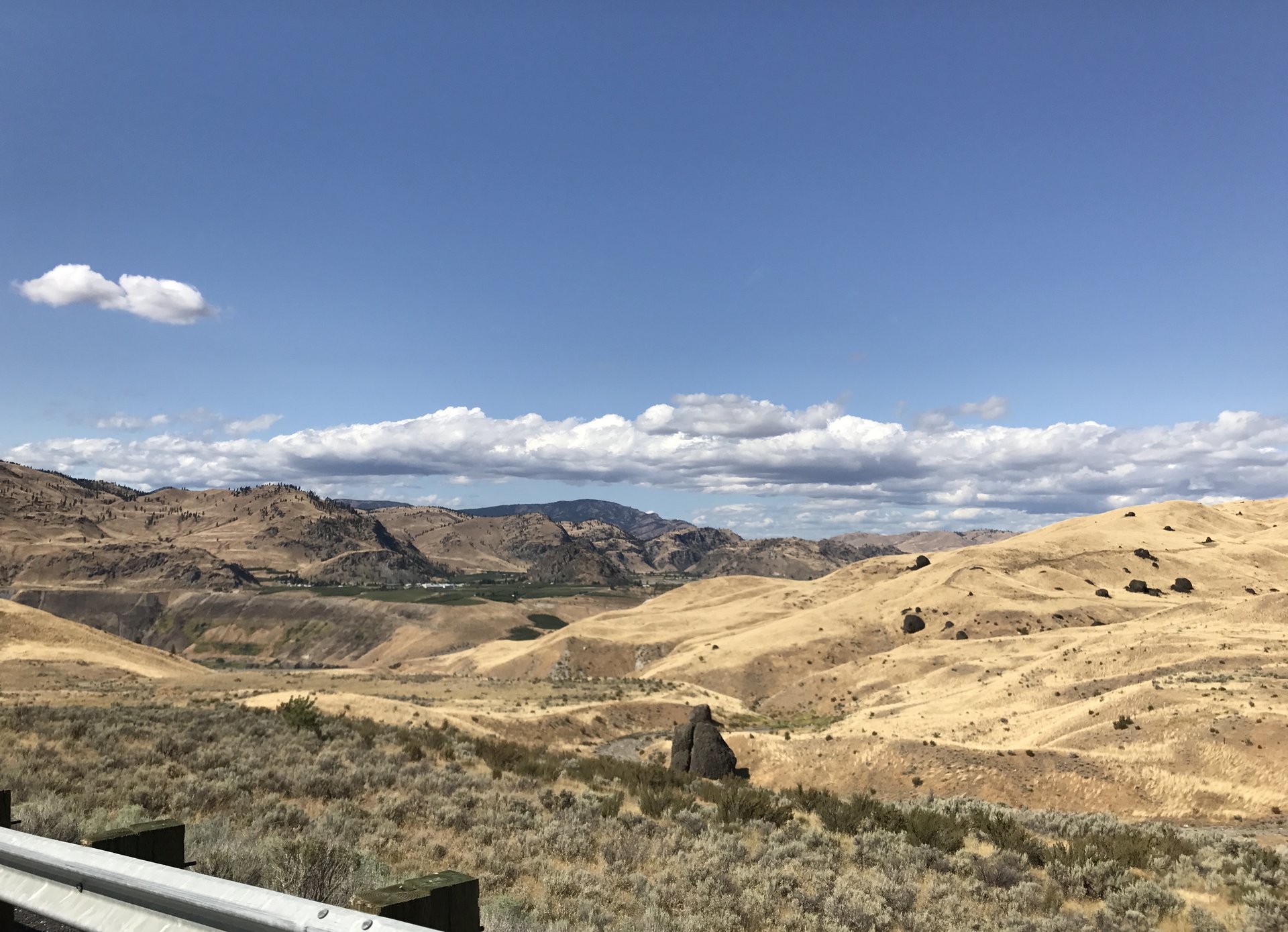 An Elemental Journey Through Time

Seventeen million years ago, near the Washington, Oregon, and Idaho borders, oozing volcanos spewed lava, much like Hawaiian volcanoes today. Over and over again, over millions of years with thousands of years between them, the lava oozed and flowed over what we now call The Columbia Plateau.  For more about the lava flows, see Professor Nick Zentner explain.

The evidence is clear:

After the lava flows, loess, windblown silt, settled onto the plateau, creating the rich farming land around the Palouse area. At some point, the huge plateau shifted and tipped, so that the northeast corner is at 2,500 feet about sea level, while the southwest corner near Pasco is only 400 feet above sea level. The exposed points of this are called the Coulee Monocline.

Just north of Coulee City exists evidence of the monocline:

See the vertical on the left, and the monocline broken off on the right:

The Coulee Monocline helped direct the megaflood to flow southwest.  What megaflood?

What could cause this “coulee,” this place where water once flowed, and flowed dramatically? The water in this coulee, Banks Lake, is a reservoir drawn from Lake Roosevelt behind Grand Coulee Dam, created for irrigation of the Columbia Plateau.

A flood of massive proportions created from the melting of glaciers sixteen thousand years ago!  Glacial Lake Missoula created Dry Falls and the Grand Coulee.

From the museum at Dry Falls:

This occurred at least one hundred times over the course of the ice ages.

Upstream from the receding plunge pool erosion is Steamboat Rock, created because at it’s north end is a bed of hard granite, not easily eroded by even this powerful torrent of water.

Yes, these floods are too huge to believe [National Park Service].

As the glacier moves, it picks up whatever is in its path, and when it begins to melt and recede, it drops that which it has gathered, sometimes hundreds of miles from where it is located. These are called erratics and sometime haystacks.

This is called Yeager Rock, east of Mansfield on the Waterville Plateau.

You see them dotted all over the featured image, as part of the kame and terrace feature of glacial sediment. A kame is a sediment left from it’s flow within the melting glacier, forming domes and small hills, often with erratics.

Sometimes, as the glacier melts, it drops off huge chunks of ice, some the size of huge buildings. Remember, the glacier at this point is one mile high! It falls, indenting the ground and leaving a depression that often fills with water in the spring. These are called kettles.

This one at Dry Falls, no doubt was an ice chunk carried in the huge flood:

Sometimes the glacier’s melting forms rivers with in and under the glacier, and when the ice is completely gone and the water dries up, it leaves a winding mound of its sediment, a river turned upside down. This is an esker.

And today, because of the fire and water and ice, we have the electricity generating and flood-controlling and irrigation management of the Grand Coulee Dam.