What do you see?

Or, if you are a more descriptive or detailed person, you might have said:

If you are a naturalist, you might have said:

One picture means different things, depending on what you know — or want to know.  So if you searched the internet for “why are there rocks strewn all over the land by soap lake wa,” you would find among the many results these two sites:

The first one is an old book and over a hundred pages long.  So, I skipped to the second link by the National Park Service and found a link to short “geobook” titled “Lake Roosevelt and the Case of the Channelled Scablands.” It’s a little mystery for you to solve.  In that book, I clicked my keyboard “command or control + F.”  A search box appears and I typed in “rocks” since that’s what I’m wondering about.  Rocks were mentioned eleven times, and as I looked through, the second mention of “rocks” showed a picture of a giant rock in the middle of a field. It arrived on glaciers or floods or rivers. And on the next page was a word to learn: erratic — a rock plucked down from somewhere else, brought in by a flood or glacier.

Now I have a better word to search: erratic

A search for “erratic boulders Soap Lake, WA Highway 17” I found a great site called “Huge Floods,” which brought another term: Scablands. Also, a geologist, Bruce Bjornstad, studies all this area and the huge flood. He creates an entire YouTube channel dedicated to Ice Age Floods.

Erratics near my area:

I also found on the huge floods site another scientist name, Nick Zentner, who has a vimeo about erratics:

And when I searched YouTube for him, I found this video on “erratic boulders” — he’s the 2 Minute Geology professor from Central Washington University:

Now I have terms and names to really search out to learn about those boulders.

Here’s an image near where my picture was taken: 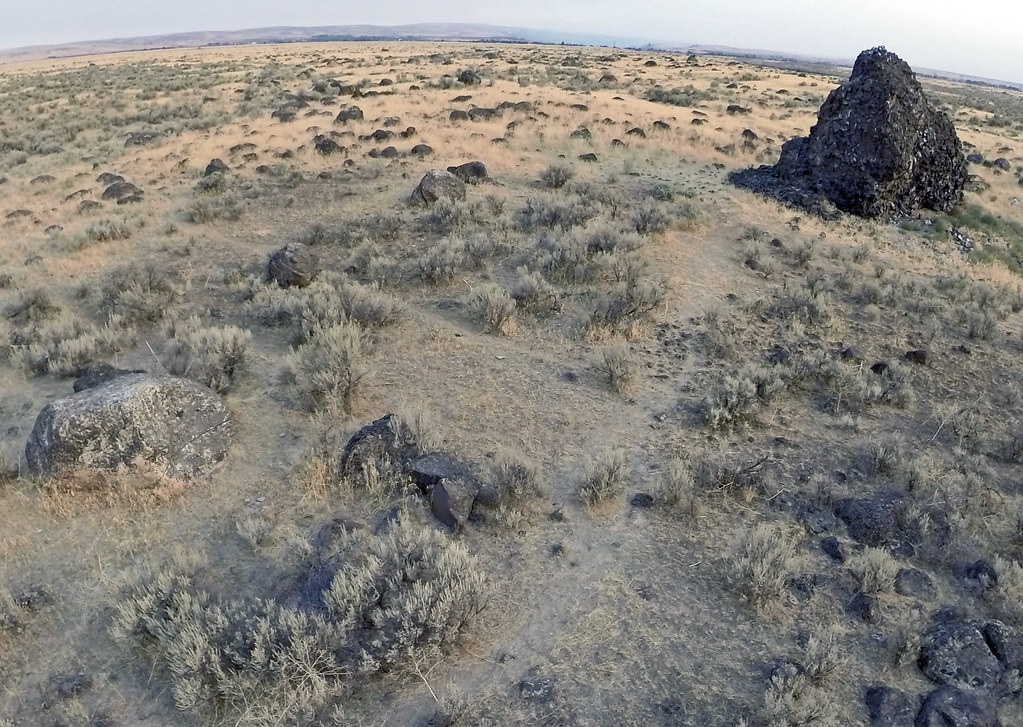 I could become a geologist just learning from these science sites!

Now you know my search journey — it requires key word searches, some listening and reading for my key words, until the information quenches the thirst for knowledge.  So, what would you like to learn about?

Look at pictures — jot down questions and begin search that geographic area with specific terms.  Remember to use the “command or contral +F” trick to search for your key words on each article or web page — that’s a real time saver.

The picture was taken today south of Soap Lake, WA and northwest of Ephrata, Wa. We were traveling to pick up items for our business.  It’s the first time in fifty-one days that I have ventured out of the neighborhood. There were many more cars on the road than usual for a Sunday afternoon. However, no one was gathering in groups but instead were physically distant from one another while finding places to hike with their families. We saw only a few people as we drove by at grocery stores and other places that can be open.  Many people wore masks.  #StaySafe #StayHealthy

My other learning from my image:

Pacific Northwest Laboratory — What About Bunchgrass?

Try the Question Formulation Technique to plan your inquiry and Think Sheet.