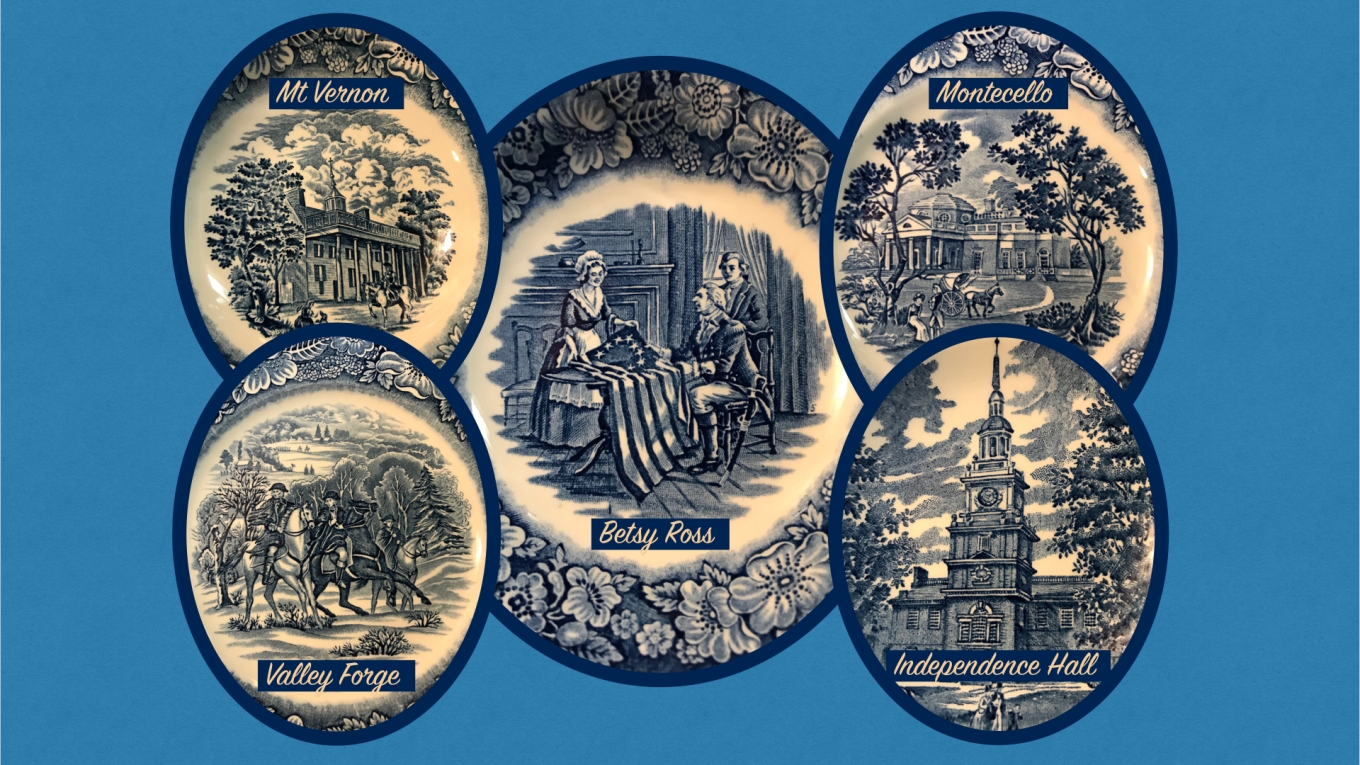 I am a progressive Democrat. I am a patriot. Even the dishes we eat on have historic scenes because I loved the blue color and the different scenes from our history–I am proud to be an American. I remember attending a conference at Brown University and taking a side trip for a week in Boston, near where my brother lived. I was so excited to visit so many places of the history of our United States: Mt Vernon, Monticello, Plymouth Rock and living museum, Green Dragon Tavern, Robert Frost’s home, Paul Revere’s home, Nathaniel Hawthorne’s home, Walden Pond, Lexington and Concord, North Church, and so much more. Our history isn’t pretty: we’ve not been perfect in our quest to form a more perfect union, but we’ve moved forward together in conversation and compromise, with a few hiccups along the way.

Today, from a sweet and kind person who has lived in my community for longer than I have, emailed me a video. I don’t think she meant to send it to me, but it was emailed directly to me as a BCC, so I don’t know how many others received it. I’m not going to link to it or give you its full name. You can google to find it; part of it is called RealityCheck; it’s from 2017 and was created by a company whose sole mission is to denigrate the “left,” and does so quite rabidly, filled with emotional disinformation inferring the left is somehow in favor of disrespecting laws, supporting terrorism, and forgetting 9/11.

I reported it on YouTube; it’s the first time I’ve ever reported a video because I believe in Freedom of Speech, but it’s filled vitriolic insinuations and disinformation about Democrats, the “left”, sanctuary cities, immigration, which sets up divisiveness and hindering relevant and helpful conversation.

It’s depressing, sad, and disconcerting that a 2017 video is again making its rounds in 2019 on social media and email to divide us as Americans.

How do I respond?

I’m not sure how to reply to the email, but I do have a response to the video:

I am such a patriot. I love our flag. Many times when at an event where the flag is displayed, I’ll quietly go up and correct its orientation so that the eagle of the staff faces the crowd. I’m amazed at how many people don’t even notice that the flag is not displayed correctly. I stand and cross my heart when the flag passes by with an honor guard of veterans at the beginning of our wonderful community Colorama parade, or any parade or event. I usually stand up for ALL the flags. I’m amazed at how many don’t.

And the Constitution. I love the preamble “We the People…”

“We the People of the United States, in Order to form a more perfect Union, establish Justice, insure domestic Tranquility, provide for the common defence, promote the general Welfare, and secure the Blessings of Liberty to ourselves and our Posterity, do ordain and establish this Constitution for the United States of America.”

In my classroom, we showed respect for our flag and our veterans. And we showed respect for each other, making sure all voices were heard. My students even wrote their own “Learning Guidelines,” a Constitution for our classroom. We learned what it means to be one classroom, united, working together. Because that is what America and the American dream is about: having a voice in our government and community, working together to make things better for each of us, no matter who we are.

I will never forget that man falling from near the top of the tower. I will never forget that smoke. I will never forget all the response organizations — of all colors and creeds and beliefs coming together to help save anyone in those towers — the World Trade Center towers, which were built to revitalize New York and represented the progress for the future of New York, the United States, and the world; it was so huge and had so many companies and workers, that it had its own zip code. So I won’t forget that the World Trade Center stood for the American dream and American leadership. I also won’t forget that most of the terrorists were from Saudi Arabia, a country whose leader ordered the killing of a journalist, a country the current president befriends and supports.

I also know that not all Saudi Arabians are terrorists and neither are the migrants coming to America to flee the awful situation in their own countries — awful for a variety of reasons and solving that would be a great option for the world, rather than simply herding them into cages like cattle.

Just like not all the people in our community are criminals, although just thinking of the local school district, at least three white males associated with the school district in the thirty years I’ve lived here have been investigated for child molestation.  It doesn’t matter what population we talk about: there will be those who follow the law and those who don’t.But I, for one, give them the benefit of the doubt — innocent until proven guilty [a truly American invention] and the common decency to treat them like human beings while they defend themselves.

I am a patriot who believes in We the People forming a more perfect union and establishing justice and liberty for all for ourselves and our posterity. It is far better to work together for a more perfect union “with liberty and justice for all.” That’s what I pledge to the flag. We are a republic of diverse cultures, like it or not, and each one of us needs our voices heard and respected.

So that’s my response to the video, which to me is divisive and bullying– inferring Democrats are unpatriotic and unAmerican — labeling the “left” as unAmerican. That is not true. Each item in that video should be researched for its truths and misleading statements.

I am just as patriotic as Republicans; I have a different world view– one of human rights, working together to better the world, not labeling or stereotyping people who are different than me. I think [I hope] most Republicans want the same.

Did you know that the early use of the word sanctuary was in reference to “a church or other sacred place where a fugitive was immune, by the law of the medieval Church, from arrest?” So “sanctuary” cities and states have history behind them, even a Christian history — to protect people from unfair laws or unfair treatment. It allows people to be “innocent until proven guilty” and to be treated with humanity. I’ve included information about sanctuary cities below– they are NOT violating the law.

I don’t think that video was treating Democrats as equals or as humans. It was created in 2017 by a company whose mission it is to vilify Democrats or the “left,” as they call it. It is being re-sent around media again, just to continue to divide us. It’s designed to stir up patriotism against other Americans. How unAmerican is that? United we stand. The United States.

Instead of offensive videos of propaganda, we should be having conversations for common ground and discussing policy, not party. I hope we can stop the spread of divisiveness when our country really needs unity, healing, and respect for each others’ voices. We are all Americans.

And that’s why I will not forget 9/11 either. United We Stand. Won’t you join me and build a better, more inclusive and free America?

“WHAT IS A SANCTUARY CITY?
A sanctuary city is a place that has decided to keep local resources to solve local problems. Some people think “sanctuary” means the city is harboring fugitives. That’s a misunderstanding of the term. A better term than sanctuary might be local control or safe city. I’ll use the terms sanctuary city and safe city interchangeably. A sanctuary city has limited the extent to which it will volunteer resources in support of federal immigration enforcement agents’ responsibility to enforce federal immigration law. These limits can take many forms: saying no to federal requests (known as “detainers”) to conduct joint patrols, refusing to jail an individual who has posted bond and a judge has said can be released, or refusing to gather more information—such as immigration status—than is needed to determine if an individual is eligible to receive services.
Any public place can take this path. Cities are the best-known examples, but counties, states, universities and school districts have also asserted that it’s not their responsibility to enforce immigration law.

DO SANCTUARY CITIES VIOLATE FEDERAL LAW?
No, sanctuary cities do not violate federal law. Federal law requires public entities to share and maintain information that has been gathered on an individual’s citizenship or immigration status. Federal law does not require compliance with federal requests to prolong detention. It does not impose an affirmative duty to gather information about place of birth or immigration status. It does not require localities to give local resources to assist federal immigration agents in carrying out their federal immigration enforcement responsibilities. So long as a local sanctuary policy does not limit communication or maintenance of information on a person’s immigration or citizenship status, it will not run afoul of federal law, and I know of no policies that restrict the sharing of such information.”

How do I respond?

I’m still not sure how to reply to the email; I’d like to start a conversation, not reply as a reaction or retort. Should I reply? I think I need to be bold and speak up, but kindly.

Update, and a lesson:

This happened tonight. My friend who sent the video and I attended the same meeting. And guess what? She shared how to donate items to the Salvation Army so they can help set up battered women or refugees into their own apartments. This does not compute with that video– it’s the opposite. So, three lessons:

So— how would you respond? 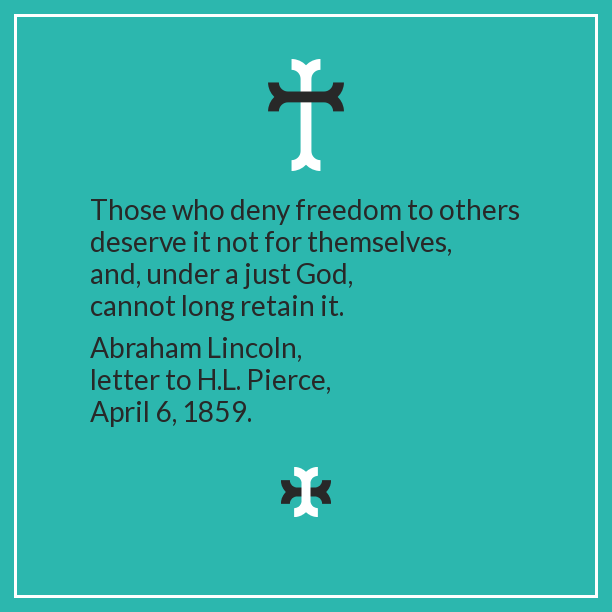